A little over a week ago, professional hockey commentator and human controversy generator, Don Cherry, caused a stir when he expressed his outrage on hearing that his partner, Ron McClain had eaten a seal burger for lunch at Mallard Cottage in St. John’s. Cherry called McClain a “barbarian” for eating a “little baby seal”. After the immediate backlash from Newfoundland, a place close to the former coach’s heart, he clarified that he has no problem with eating seal; just that he found it odd to be eating seal for lunch.

It was interesting is that Cherry didn’t just talk of seals, he talked of baby seals, the image of which has long been used as an emotional appeal against the seal hunt. The picture of the newborn white coat seal was the focal point of the single most successful animal rights campaign ever, which resulted in an outright ban on the harvesting of white coasts in the 1970s.

Those in favour of the seal hunt often rail against the continuing myth that baby seals are still hunted, but to be fair, it is more of a gross exaggeration than a myth. Seals usually molt their coats after three weeks or so, after which it is fair game to kill them. Many anti-seal hunting camp use this as justification for their continuing to state hunters are still killing baby seals. I’m not going to attempt to classify whether a 3 week old seal should be more accurately described as a toddler, an infant, or simply in the spring of its life, but it is fair to say that three weeks is a very young seal

What I find baffling is that so many people who were so appalled at the notion of eating a baby seal, as opposed to an adult one, have absolutely no problem eating lamb, veal, or pub style chicken wings. Seals are no doubt cute, but nothing is as adorable as a little baby lamb. A crying lamb actually sounds a little like a crying baby, but when have you ever heard anyone suggest that you should boycott a restaurant that serves baby sheep?

Whether you are someone against the killing of young animals, or just young, cute animals, either way the serving of lamb on menus should be sparking a little outrage. Perhaps a lot of people who support animal rights just really like the taste of lamb. Maybe if they tried a seal burger they wouldn’t be quite so outraged over the seal hunt. 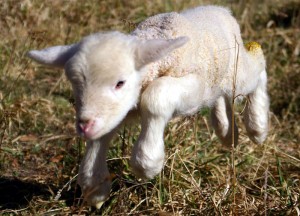